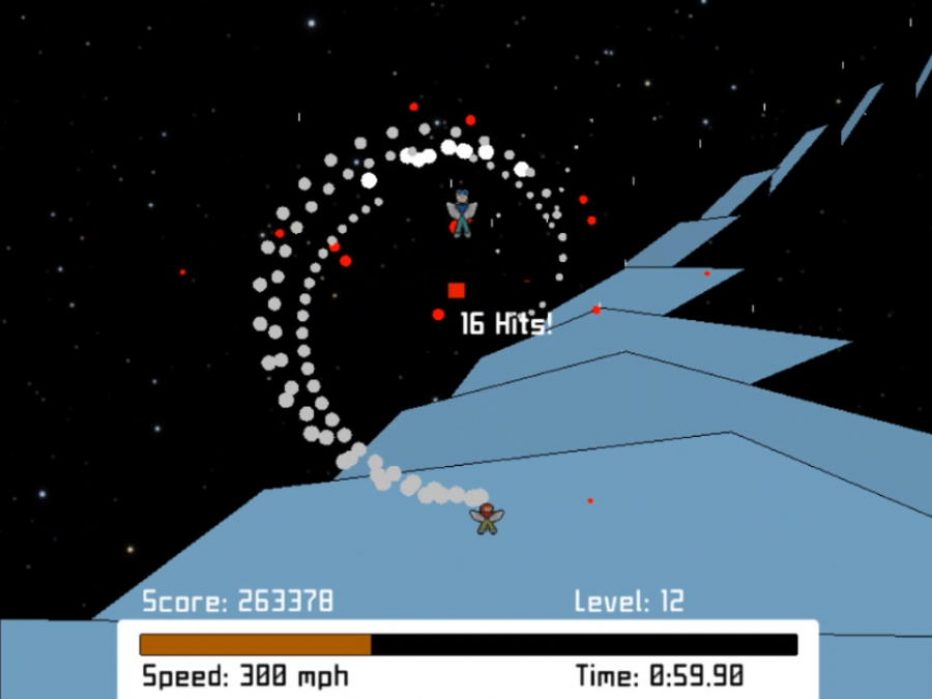 Transporting players to the far reaches of space, Dylan Franks’ 3D bullet hell Cosmic Zephyr DX features a one-on-one duel with a bevvy of bullets. The idea of hurtling through space while engaged in a battle for the ages sounds enthralling, but the execution here drops the ball in the most spectacular of fashions.

A fast-paced title, players will hit speeds up to 300 miles per hour as they set out to take down their opponent that is looking to do the same. An endless supply of bullets is at your disposal, but your opponent has been blessed with the same ability. This premise certainly has merit – there’s a reason the Touhou line of shoot-em-ups has persevered after all of these years – but the end result is an absolute mess.

Part of this has to do with the sheer amount of clutter the game displays at any given time. The background prides itself on constantly moving through blocky, multicolor tunnels every couple of seconds, obfuscating the action in favor of a flashy display. The same goes with the bullets characters fire – not only does your spread of gray bullets fill the screen, they can often hide the shots the enemy fires right back. Though the presentation is fairly barebones, these two factors make it next to impossible to keep track of what is going on. It’s not like there is much to see with the characters though – the enemy is made up of a single blue sprite, and even your own character just glides along without much thought put into its design.

This is made that much worse with the fact that hit detection is absolutely shot. There were times where we racked up “combos” in the 600 range, while others where we missed shots that clearly should have collected. Oftentimes the opponent won’t do much of anything, simply sitting in place and serving as an easy target. The AI is predictable to a fault, and though there are multiple difficulty settings, we found that the challenge varies from being too easy to nearly impossible. As a result, it is broken on a fundamental level, with victory or defeat being left to chance.

The entirety of Cosmic Zephyr DX’s 13 levels can be finished in around 15 minutes. Players can vary things up with a number of different music tracks dubbed things like “diamond,” “ambient,” and “dance,” but all come out sounding like generic, royalty free samples. Players’ times, high scores, and best combos are also recorded, but there are no online leaderboards to share your prowess. There are also no achievements to speak of in this title.

Just be warned that these control problems extend to the menus as well. We used an Xbox One controller connected via Bluetooth, but both that and the keyboard would not acknowledge the most basic of inputs when we were trying to set things up. There would be times where the screen would quickly scroll through options, and other times where things would just hang in place like the title was frozen. The white text on a black background is far from demanding, so we are unsure what is causing this dissonance.

Cosmic Zephyr DX is unplayable. Between the nonexistent AI, the unpredictable mechanics, and the lack of polish, nothing works as it should.